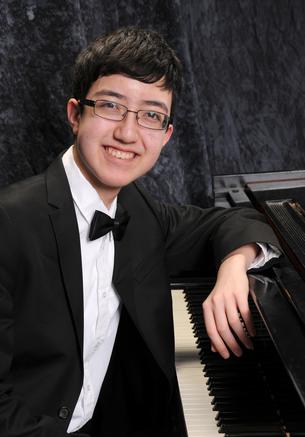 Christian Taro Verfenstein is 17 years old and presently in 12th grade at Huntington High School. Christian is currently studying the piano with Mr. Julian Martin at the Julliard Pre-College. Before that, he studied for five years with Dr. Donald Pirone, Director of Queens Pre-College. Christian was the only piano finalist in “Got Talent,” sponsored by Huntington Arts Council in February, 2009. He was invited to play the piano at Huntington Fall Festival by the Huntington Arts Council. In addition to his recent win of the North Shore Symphony Orchestra's Young Artist Award Competition, his awards include first prize in his age group from the AMTL Scholarship in 2012, second prize at the New York Music Competition, and third prize in the Young Artist Concerto Competition. Christian earned an honorable mention at the NJ Young Artists Piano Competition in 2014, and in 2016 was awarded first prize in the Alexander and Buono Piano Competition. Christian volunteers his time to play the piano at Huntington Hospital and his church. He also accompanies voice students at Carnegie Hall and other venues around New York City including the Baruch Performing Arts Center and the Peter Jay Sharp Theater. Christian enjoys playing the violin in his high school orchestra, enjoys chamber music as a pianist, and is an avid model railroader.