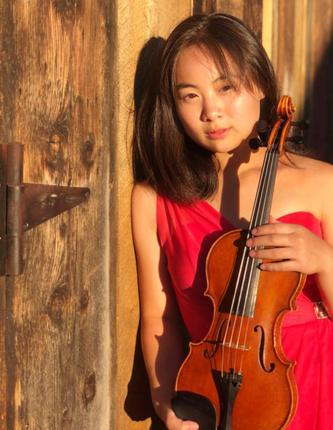 Violinist Sarah Ma is currently an undergraduate student at The Juilliard School with Li Lin and Donald Weilerstein. During her time as a scholarship student at both the Juilliard School and Manhattan School of Music Pre-College divisions, Sarah performed with numerous orchestras including the Island Symphony Orchestra, Ensemble 212, Indiana University Informatics Philharmonic, the Bravura Philharmonic Orchestra, the Washington Heights Chamber Orchestra, New York Chamber Players Orchestra, New York Concerti Sinfonietta, the Manhattan School of Music’s Symphony Orchestra, the Accademia D’Archi Arrigoni in Italy, among several others. Sarah was a laureate of the 2019 Cooper International Competition, where she performed an 1828 Vuillaume generously sponsored by Florian Leonhard Fine Violins and the Anthony Quinn Foundation. Recently, Sarah won the Nordic String Academy competition and will be touring in China in 2021–22 season, and was a featured musician in Show 393 on NPR’s “From the Top.” Outside of music, Sarah is passionate about volunteerism and community organizing. Sarah has attended the Heifetz International Music Institute as well as the Aspen Music Festival and School for several summers as a student of Robert Lipsett, Donald Weilerstein, and Paul Kantor.
​