She made her conducting debut at Carnegie Hall with the Long Island Youth Orchestra, and in January 2017 she will guest conduct Division IV Orchestra at the Nassau All County Festival at Tilles Center. Guest conducting engagements include the Island Chamber Symphony, the Bronx Opera Chamber Orchestra, the Gemini Orchestra, the LIU Post Percussion Ensemble, The Seoul Symphony of New York, two premieres of guitar concertos at the Long Island Guitar Festival, and at the Brooklyn Conservatory of Music. Ms. Deaver participated in Tanglewood’s Conducting Seminar Classes and the conducting seminars of the American Symphony Orchestral League. She has conducted in Scotland, England, Spain and Germany where she was selected to conduct at the International Master Class in Orchestral Conducting sponsored by the Philharmonisches Kammerorchester Berlin. In Korea she guest conducted the Pusan Festival Orchestra and the Masan City Symphony Orchestra. Ms. Deaver was the conducting instructor for actor Freddie Highmore for Warner Brothers’ movie August Rush.

Susan Deaver is on the Music Faculty of Stony Brook University where she is the conductor of the University Orchestra, and at LIU Post and the Manhattan School of Music's Precollege Division as both flutist and conductor. She is also the Co-Founder & Festival Director of the LIU Post Chamber Music Festival. Her Bachelor's and Master's degrees are from the Manhattan School of Music where she received her Doctorate in Musical Arts.

Susan Deaver completed 25 years as North Shore Symphony Orchestra’s Music Director and Conductor in June 2016 and successfully established NSSO as one of Long Island’s foremost community orchestras. Credited with innovative programming, she made great strides in organizing and securing the future of NSSO including the orchestra’s residency at Plainview Old Bethpage JFK High School, and the important establishment of the Friends of NSSO, which now is a vital part of the orchestra’s successful organization. In addition, she established NSSO’s Young Artist Award Competition, and founded the orchestra’s Artist-in-Residence Program. A champion of new music, she conducted premiers of orchestral works written for the North Shore Symphony Orchestra. 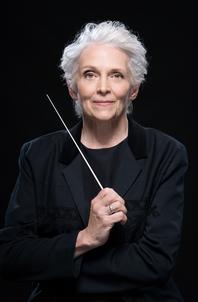