well as faculty recitals at the Manhattan School of Music, among others. Mr. Grossman has released two albums (one classical and one jazz) entitled "The Bass of Both Worlds", available from his website, www.davidjgrossman.com. Mr. Grossman, a passionate chamber musician, performs in the New York Philharmonic Ensembles Concerts at Merkin Hall and has performed at the 92nd Street Y as well as with the Chamber Music Society of Lincoln Center. In 2011 he was a featured artist at the Mt. Desert Chamber Music Festival. In the field of jazz, Mr. Grossman was a member of the Marcus Roberts Trio and has performed with Wynton Marsalis, Lew Tabackin, Toshiko Akiyoshi, and Mark O'Connor; he has recorded with Donald Vega, David Morgan and Loston Harris. Mr. Grossman’s compositions include Mood Swings for trombone and double bass (written for New York Philharmonic Principal Trombone Joseph Alessi), which delighted audiences during the 2010-11 New York Philharmonic Ensembles season at Merkin Concert Hall; Fantasy on “Shall We Gather at the River?”, available on former New York Philharmonic English Horn Thomas Stacy’s recording, Plaintive Melody; and two early compositions: Swing Quartet and String Quintet No. 1, which were premiered by The Chamber Music Society of Lincoln Center.

Double bassist and composer David J. Grossman enjoys a multi-faceted career in the realms of classical and jazz music, performing in concert halls, chamber music settings, and jazz venues worldwide. Born and educated in New York City, he joined the New York Philharmonic as its youngest member in Spring 2000. Mr. Grossman has been an ardent student of Orin O'Brien, with whom he now enjoys the pleasure of playing in the Philharmonic bass section. He is also a member of the double bass faculty of Manhattan School of Music. As a soloist and clinician, Mr. Grossman has given recitals and master classes at many prestigious music schools across the country including The Boston Conservatory, Yale School of Music, the Hartt School of Music, Penn State University, and the New York Summer Music Festival as 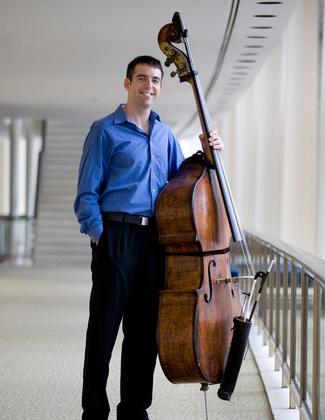